This entry is based on a piece I created of personal hero Gassy Jack on his voyage down the Fraser to what is now Gastown! I felt a enormous personal draw to this competition because I used to live in Japan, where every city, town, and even neighborhood had individualized manhole covers reflecting the district's history. I used to travel around collecting images of all the different covers I could find, and wondered why we didn't do the same in Canada! I am all behind the city of Vancouver's initiative to aim for designs that remind people of the environmental impact of what goes down into the waterways, but see this also as an opportunity to celebrate our vivid, exciting, even swashbuckling city history! It troubles me how few people know the story of Gassy Jack, who was a heck of a guy, and of this history! So here Gassy Jack, sometimes called Whiskey Jack, rides his single barrel down the rivers taking in the spectacular natural beauty of the place that would become Vancouver! 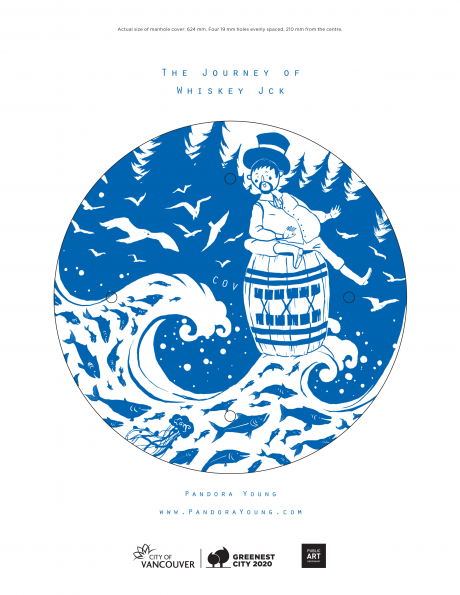